The Fire Triangle- the science of fire 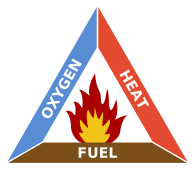 The triangle illustrates the three elements a fire needs to ignite: heat, fuel, and an oxidizing agent (usually oxygen). A fire naturally occurs when the elements are present and combined in the right mixture, meaning that fire is actually an event rather than a thing. A fire can be prevented or extinguished by removing any one of the elements in the fire triangle. For example, covering a fire with a fire blanket removes the oxygen part of the triangle and can extinguish a fire.

To stop a combustion reaction, one of the three elements of the fire-triangle has to be removed.

Without sufficient heat, a fire cannot begin, and it cannot continue. Heat can be removed by the application of a substance which reduces the amount of heat available to the fire reaction. This is often water, which requires heat for phase change from water to steam. Introducing sufficient quantities and types of powder or gas in the flame reduces the amount of heat available for the fire reaction in the same manner. Scraping embers from a burning structure also removes the heat source. Turning off the electricity in an electrical fire removes the ignition source.

Without fuel, a fire will stop. Fuel can be removed naturally, as where the fire has consumed all the burnable fuel, or manually, by mechanically or chemically removing the fuel from the fire. The fire stops because a lower concentration of fuel vapor in the flame leads to a decrease in energy release and a lower temperature. Removing the fuel thereby decreases the heat.

Without sufficient oxygen, a fire cannot begin, and it cannot continue. With a decreased oxygen concentration, the combustion process slows. Oxygen can be denied to a fire using a carbon dioxide fire extinguisher, a fire blanket or water.